Maintaining relative humidity in offices, workplaces, schools or any other building reduces the potential risk of transmitting viral diseases.

Many scientific studies have confirmed that  an indoor relative humidity between 40%-60% will help fighting against viruses spread on 2 fronts:

Here are three of what we think as the most pertinent scientific studies related to the subject:

“Maintaining a relative humidity between 40%-60% within the building environement may help to limit the spread and survival of SARS-CoV-2 within the built environment, while minimizing the risk of mold growth, and maintaining hydrated and intact mucosal barriers of human occupants.” Read more

“The relationship between inactivation and RH was not monotonic, and there was greater survival or a greater protective effect at low RH (20%) and high RH (80%) than at moderate RH (50%).” Read more

SARS-CoV-2 is transmitted by aerosols 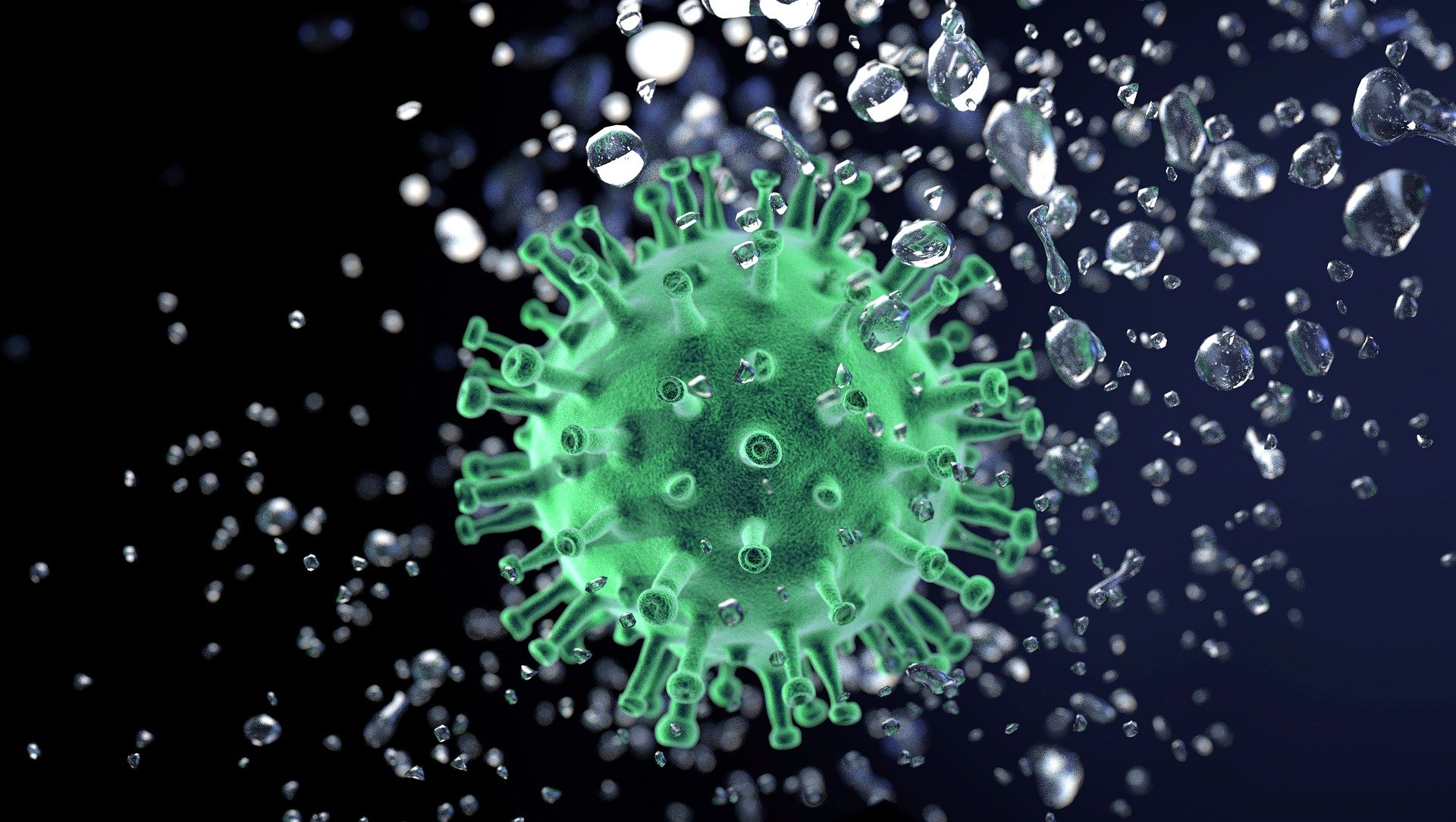 CDC (Centers for Disease Control and Prevention) and the WHO (World Health Organization) recognize that “pathogens that are primarily transmitted by close contact (i.e. contact and droplets) can sometimes also be transmitted by air in special circumstances”.

‘’The virus can spread from an infected person’s mouth or nose in small liquid particles when they cough, sneeze, speak, sing or breathe heavily. These liquid particles are different sizes, ranging from larger ‘respiratory droplets’ to smaller ‘aerosols’. ‘’

Inadequate ventilation or air treatment allows an accumulation of small respiratory droplets and airborne particles that can remain viable and infectious in aerosols for hours.

The smaller the virus particle is, the longer the spread will be and the humidified air will act directly to stop the spread. This is explained in a study by Makoto Tsubokura, team leader for computational fluid dynamics at Kobe University and the RIKEN Institute. When the droplets come out of your mouth, they mix with the air and disperse. But when the air is dry, the droplets evaporate faster. As they evaporate, what we call aerosolization progresses. So, the droplets that would have fallen on the floor disperse more if the air is dry.

Maintaining air humidity between 40% and 60% indoors would allow a better fight against coronaviruses by reducing aerosol contamination.

How humidified air is helping us?

Above 30% relative humidity, human body’s defenses are stronger. Air that is too dry can be harmful to health due to dehydration.

Humidity is an essential condition for well-being :  Humidified air protects the human body and prevents dryness of the skin, eyes and lungs: 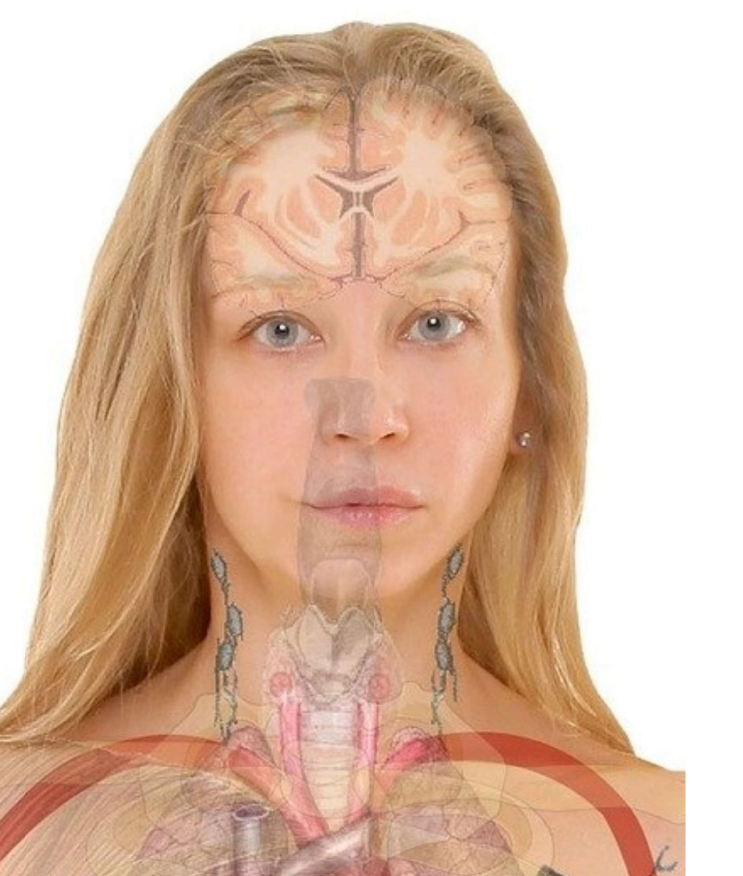 Thanks to recent studies by ASHRAE, an international technical organization in the field of HVAC engineering, we have more information and new directions for HVAC systems to help mitigate SARS-CoV-2 transmission.

Isothermal humidification produces hot steam from boiling water. Energy to evaporate the water is introduced by a water heating source once the water has turned to hot steam it will be naturally a quickly absorbed by surrounding dry air with no more energy exchange.

With isothermal humidification, steam at 212F [100C] injected into the air will kill any pathogenic particles (bacteria or viruses) present.

It is pure, sterile and there is no additional risk of contamination from water; since, if any it would have been killed by heat-up water to the boiling point.

Adiabatic humidification uses a source of cold water, which need to be free from contaminant before evaporation to the air. There are many strategies to reduce pathogenic particles from water itself, like filtration or purification such as Reverse osmosis filtration or deionization process, or with UV disinfection.

Unfortunately, decontaminated or disinfected water evaporated into the air will not be able to eliminate pathogenic particles from the air, it will only pick them up and transport them further.

In conclusion, isothermal humidification using steam humidifiers is a better solution to fight against SARS-CoV2 causing COVID19 disease since the hot steam injected in the air is pure and sterile (free for any germ). This steam will kill any virus particles that would be in direct contact with the steam.

As more and more states in the USA and countries such as Canada are legalizing the recreational use of marijuana, this business is booming.

There are many ways to grow marijuana. Today, indoor growing rooms facilities are considered, by many, to be the most efficient. However, because of the extensive use of energy by indoor facilities, some are experimenting with greenhouses or hybrid facilities (a combination of a greenhouse and an indoor room). Water temperature, nutrients, humidity, air quality, carbon dioxide levels and lighting are the most important parameters to control, they are now all very documented.

In this article we will focus on the need for proper humidity control and the optimal Relative Humidity (RH%) level in air for the different growing stages.

Why is humidity control important for marijuana growing?

Humidity is probably one of the most important air quality parameters to control but it is the most poorly designed and executed. If it’s too humid, mold growth can destroy the entire crop. If it’s not humid enough, plants can get stressed and die.

Nutrient absorption: humidity levels influence how much water marijuana plants absorb which influences the amount of nutrients it absorbs. A low humidity level causes plants to drink more resulting in “nutrient burn”, which gives the leaves a yellow or burnt colour.

Altered growth: marijuana plants in early stages need a higher humidity level whereas more mature plants prefer lower humidity levels. Moisture is one of the factors that controls the opening and closing of the stomata. Dry air causes the stomata to close to limit the loss of water.

What Humidity level for which growing stages?

Drying: While the marijuana is drying, a relative humidity of 50 per cent should be maintained. This stops the plant from drying out too quickly, because the water leaves the cannabis slowly.

Lights On and Off: During the Light-On period, humidity levels should be as per set point (indicated in the above table). As soon as the lights are turned off, the plants will release moisture into the air, the RH% level in the air must be reduced and HVAC systems should respond with de-humidification mode.

Young Sprout:  Seedlings and clones like a high humidity levels of 65-80%. Because the root system is not developed, high humidity allows the absorption of water through the leaves.

Vegetative growth: Humidity levels can be reduced by 5% per week (acceptable range: 40-70%). Now the roots absorb more water, and the evaporation by the leaves refreshes the plants, so moisture content in the air can be reduced. 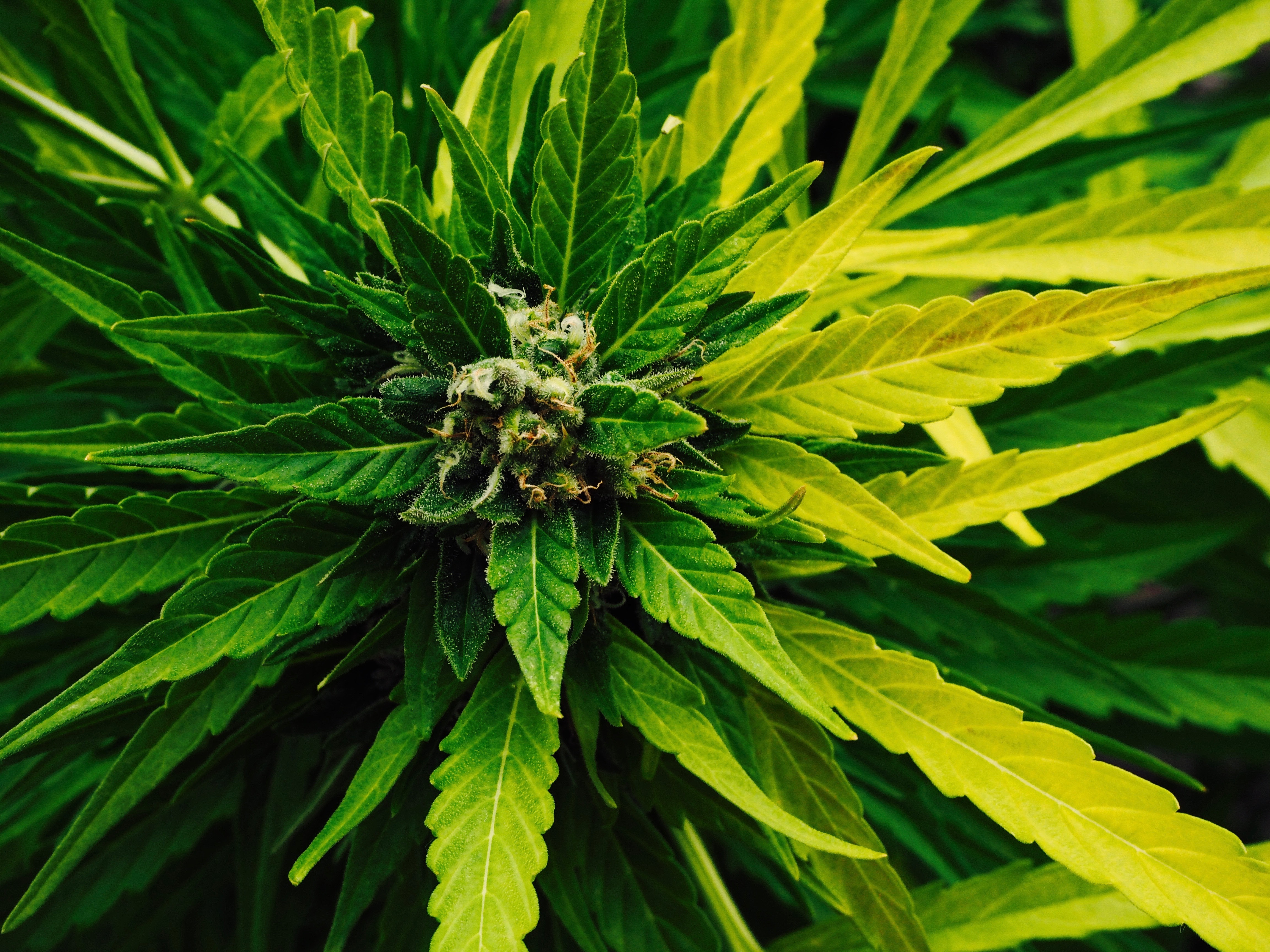 Flowering: Humidity levels should be lowered to between 40 and 50%, as flowers can be affected by high humidity level typically above 55% RH. Each grower will have their own recipe at this stage since moisture content in the air will affect appearance and flavor of the crop.

Indoor facilities: With the need to control air and water temperature, RH% and CO2 levels as well as the lighting in order to obtain a good quality crop, it is logical to develop indoor growing facilities to be able to minimize any exterior factors or contaminant. However, a typical indoor growing facility uses 10 to 20 times more energy than a typical office building. Some experts highlight the consumption of 2,000kWh power per pound of cannabis.

In the quest to reduce energy use either for profitability or environment concern, some farmers are now experimenting with greenhouses or hybrid facilities combining greenhouse and indoor rooms. 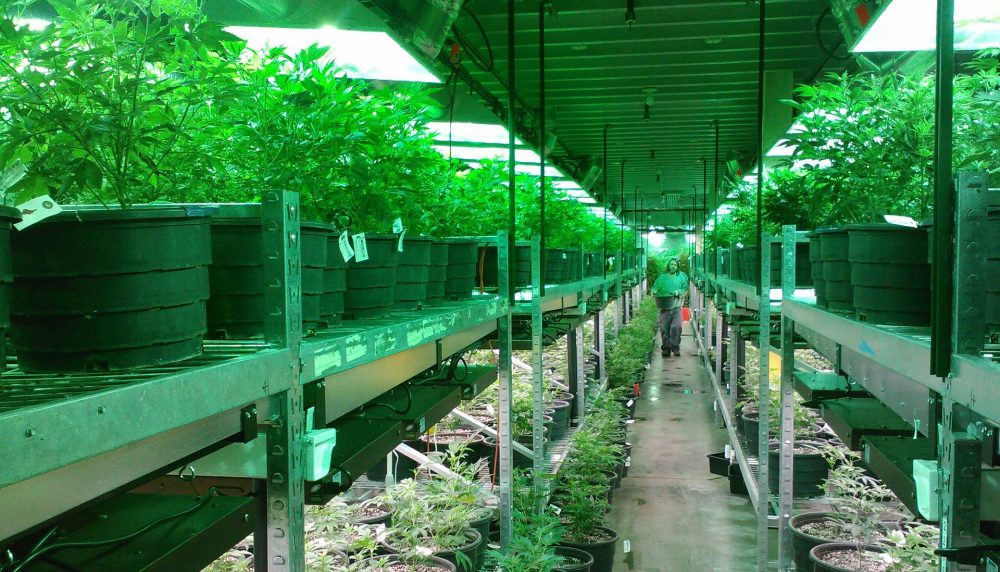 Greenhouse: Greenhouse facilities enable farmers to reduce the use of artificial lighting and power but also to produce a different and more natural product. Light deprivation would be done by blocking natural light with partial or full shading.

However, the optimal use of a greenhouse facility depends on your geographical location and climate. Greenhouse growing operations depend on the season, in order to optimize the use of the best conditions of marijuana growing to the natural seasons. 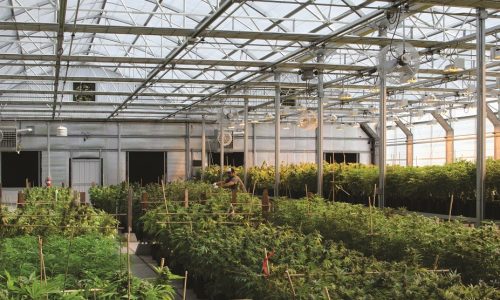 How steamOvap can assist you?

Whatever the size or the configuration of your project, steamOvap will be able to provide you with humidity control and humidifiers that will allow you to achieve optimal humidity levels for your use.

We offer an isothermal electric humidifier (IER model) that will produce clean and sterile steam with variable and very precise output to +/- 1%RH. Humidity levels can be adapted to the lighting sequence and the growth of your plantation.

Installation of one of the above humidifiers will bring you the following benefits:

SteamOvap’s technical team has already helped several small to large marijuana growing companies to design and tailor their HVAC system to optimize their cannabis production. We have helped fix many mistakes such as oversized systems, energy traps, and others.

Influenza viruses are among the most common causes of human respiratory infections and cause high morbidity and mortality. In a typical endemic season, influenza results in approximately 200,000 hospitalizations and 36,000 deaths in the United States alone.

When we consider humidity we generally think in terms of relative humidity (RH); this is the amount of water vapour present in air, expressed as a percentage of the amount needed for saturation at the same temperature. RH affects how hot we feel at a given temperature by altering the effectiveness of sweating as a cooling mechanism. In high RH, sweat does not easily evaporate because the air is already nearly completely saturated with water. Heat is therefore not lost, leading to continued but ineffective sweating. At cloud level, RH also determines whether it will rain.

Shaman et al. studied the correlation between the onset of influenza epidemics and outside air absolute humidity in the United States. First, they correlated the spatial and temporal variation of epidemic influenza onset from 1972 to 2002 (this equates to 1000 different ’flu epidemics in 48 contiguous states) with the concurrently recorded absolute humidity data for these regions. They demonstrated that negative (i.e. low) anomalous absolute humidity values were typically observed 4 weeks prior to the onset of an influenza epidemic. They found a small (55-60%), but highly statistically significant (p < 0.0005) association between atypically low local daily absolute humidity and the onset of wintertime influenza. They demonstrated that the model could accurately predict spatial and temporal variations in epidemic influenza. These data were cross-validated by performing 31 year (1972-2002) simulations for each of the 48 states.